No great story is complete without a healthy dose of conflict woven into the narrative. Whether you believe in a higher power, cosmic karma, or plain-old blind chance, it is undeniable that this conflict always seems to find its way into this novel we call life. Thus in life, as in every great novel, while this conflict may create a fair amount of discomfort, it is an essential ingredient in the creation of something worth reading (or living for that matter). That being said, allow me to tell you a story….

Rob was an adventurous young man. He loved trying new things and quickly became disinterested with repetition. For that reason, he was constantly learning new skills, taking on new challenges, and existing in a constant state of metamorphosis in retaliation to the day-to-day blasé. It was for this reason that Rob decided to take on a series of 30 day challenges. As he sat staring into the stale January air one evening, pondering what to craft for dinner, a thought drifted into his head like the pungent smoke of a corn cob pipe. He apprehensively opened the freezer door and peered into a jungle of forgotten morsels. “Why do I make four or five trips to the grocery store each week while this food piles up and slowly degrades into useless crystallized nothingness?” he pondered as the frozen mist cascaded down onto his wool socks below. Thus the idea was born. He vowed not to buy food for thirty days; to live off the bounties of his current possession and reap the rewards of frugality and culinary creativity.
A week into his embargo of groceries, things seemed to be moving smoothly. Several delicious meals had been prepared and the freezer was already beginning to look more organized. Rob’s cellphone chirped on Thursday afternoon, reminding him of his commitment to a skiing trip for the weekend with his family. He gathered his cold weather gear, his trusty camera, and a small travel guitar destined for its maiden voyage. Gear packed and house secured, he and his girlfriend headed off to the mountains just as a blizzard began raining down fluffy piles of winter enjoyment.
After three days of visiting with loved-ones and pure outdoor euphoria, the happy couple returned home. Katie headed down the driveway to retrieve her tiny chihuahua pups from their stay at le spa de grandparents with a promise to return later. Rob had been brainstorming foraged meals all weekend and, after a short hike to check the whereabouts and well-being of the local whitetail herd, headed to the freezer. He instinctively reached for the top shelf, which was the resting place of a giant porterhouse steak that had been dancing in his head all weekend. A grill hunkered outside, patiently waiting for a large helping of charcoal and mesquite and the chance to craft this tender piece of art into medium-rare bliss. As his hands drifted over the tightly packaged meat, something felt horribly wrong.He quickly withdrew his hand from the icy depths as a red tinted drop of liquid escaped his fingertips and splashed on the linoleum like the first drop of a springtime shower. A cold chill ran down Rob’s spine as he gingerly reached back into the freezer. Every item on the top two rows was completely defrosted. Packages on the door were barely below room temperature. He couldn’t believe the devastating sight. Defeated, he reached for a garbage bag under the sink and began sorting through the devastation. Forty pounds of discarded carnage and three weeks remaining in the challenge left Rob temporarily paralyzed. As he sat and pondered the potential annihilation of his month-long project, a glimmer of hope rang through the darkness. With a full pantry and chest freezer remaining, “this just adds another layer of challenge” he smirked. “This might be fun”. 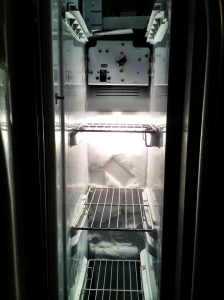 ~The preceding tale was based entirely on actual events~

Abstaining from grocery shopping for an entire month seems rather simple at first. As the days turn into weeks, however, creativity will undoubtedly need to increase in order to prevent shriveling up into a malnourished raisin. For now though, scavenging the freezer, refrigerator, and pantry has been pretty simple. For the first gourmet ensemble, I dug back to the infant years of my cooking experience. Though I have cooked professionally in the past, the roots of my culinary know-how were planted by my father. When I was a young boy, Dad and I would often have bachelor nights in which we were left to our own creativity in what, when, and how we would feed ourselves. From these nights came my first cooking lesson. Dad would layer the bottom of a deep baking dish with carrots, celery, and potatoes. A plump venison roast would be placed on this vegetable platform, followed by a braising liquid (usually wine). The roast was then baked until it reached the desired internal temperature. This recipe was simple enough for an eight-year-old to understand, remember, and master, yet it produced results that any preparer of food would be proud to display.
Thus, the nostalgic theme for my first grocery bill-free meal. Rather than the baking dish mentioned above, I decided to utilize the one kitchen tool that is rarely used in my home. Being a very hands-on type of cook, passive means of food preparation rarely appeal to me. However, for this dish, a slow cooker fit the bill perfectly. By cooking this recipe low and slow, not only do you gain the traditional pot roast initially, but the leftovers create a hearty stew much like bourguignon. The recipe was tweaked a bit more as noted below
Ingredients:

Like the original recipe, I layered the carrots and potatoes along the bottom of the slow cooker in order to create an elevated platform for the protein (as any delicious cut of wild game should be held above all other food alternatives…kidding…..but really though…). The roast was placed on the veggie platform, which then got a quick shower from the measured wine portion. Lastly, the cabbage leaves were nestled around the roast like a cozy nutritional blanket. The slow cooker was set to its high setting and allowed to cook undisturbed for four hours. The resulting smells and flavors are best explained by a common phrase used by a hero of mine , Ted Nugent: “Perfect”.

The added bonus of this meal is that the leftovers serve as an additional dinner or two additional lunches. bon appétit!