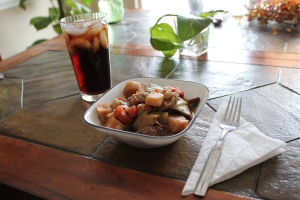 Abstaining from grocery shopping for an entire month seems rather simple at first. As the days turn into weeks, however, creativity will undoubtedly need to increase in order to prevent shriveling up into a malnourished raisin. For now though, scavenging the freezer, refrigerator, and pantry has been pretty simple. For the first gourmet ensemble, I dug back to the infant years of my cooking experience. Though I have cooked professionally in the past, the roots of my culinary know-how were planted by my father. When I was a young boy, Dad and I would often have bachelor nights in which we were left to our own creativity in what, when, and how we would feed ourselves. From these nights came my first cooking lesson. Dad would layer the bottom of a deep baking dish with carrots, celery, and potatoes. A plump venison roast would be placed on this vegetable platform, followed by a braising liquid (usually wine). The roast was then baked until it reached the desired internal temperature. This recipe was simple enough for an eight-year-old to understand, remember, and master, yet it produced results that any preparer of food would be proud to display.
Thus, the nostalgic theme for my first grocery bill-free meal. Rather than the baking dish mentioned above, I decided to utilize the one kitchen tool that is rarely used in my home. Being a very hands-on type of cook, passive means of food preparation rarely appeal to me. However, for this dish, a slow cooker fit the bill perfectly. By cooking this recipe low and slow, not only do you gain the traditional pot roast initially, but the leftovers create a hearty stew much like bourguignon. The recipe was tweaked a bit more as noted below
Ingredients:

Like the original recipe, I layered the carrots and potatoes along the bottom of the slow cooker in order to create an elevated platform for the protein (as any delicious cut of wild game should be held above all other food alternatives…kidding…..but really though…). The roast was placed on the veggie platform, which then got a quick shower from the measured wine portion. Lastly, the cabbage leaves were nestled around the roast like a cozy nutritional blanket. The slow cooker was set to its high setting and allowed to cook undisturbed for four hours. The resulting smells and flavors are best explained by a common phrase used by a hero of mine , Ted Nugent: “Perfect”.

The added bonus of this meal is that the leftovers serve as an additional dinner or two additional lunches. bon appétit!